Skip to: Turning Information into Empowerment: Strengthening Gender and Energy Networking in Africa

This report is the result of two and a half years work within the TIE-ENERGIA project “Turning Information into Empowerment: Strengthening Gender and Energy Networking in Africa”. It pulled together the efforts of organisations working in 12 countries in sub-Saharan Africa that are part of the ENERGIA Africa Gender and Energy Network, an informal network of governmental, non-governmental and research organisations working on energy and sustain- able development issues in the region, who share agreed principles on gender, women’s empowerment and sustainable development. The challenge was to strengthen the human and institutional capacities in the region to mainstream gender in projects, programmes and policies.

Energy services play a critical role across the whole spectrum of development activities and are a powerful engine for social and economic growth and for poverty reduction. Indeed, increased access to reliable, affordable energy services can totally change the way the rural poor, and in particular women, organise their time and lives, and can be a powerful means for them to combat the social and economic threats that hamper achieving human security at the individual level. There is a growing consensus that energy has to be factored into development processes if the living conditions of poor women and men are to be properly understood and improved. In sub-Saharan Africa, inadequate access to modern energy is both a determinant and a manifestation of rural poverty and inequitable gender relations. Mainstream energy policies have in- adequately addressed the role of energy as a driver of development and largely ignored the critical roles that rural women play in energy systems. Most energy projects and programmes do not apply a gender-sensitive approach in design, implementation or monitoring; resulting in interventions that do not address poor rural women’s needs at all, or at best only address them marginally.

To address such a failure requires a substantial increase in human and institu- tional capacities, and commitment to mainstreaming gender in the energy and development sectors in sub-Saharan Africa, in ways that foster change in how interests are articulated, resources are managed and power exercised. TIE- ENERGIA has made an important contribution to this objective: by making available generic gender and energy training packages specifically designed for the energy sector; by training over 260 energy and development practitioners in twelve countries in the region on how to integrate gender into projects, programmes and policies; by validating forward-looking action plans developed as a results of gender audits of national energy polices in Kenya, Senegal and Botswana and through the global dissemination of outputs and results.

Key outcomes of the action have been:

TIE-ENERGIA has been pioneering in laying the groundwork for mainstream- ing energy and gender with a comprehensive capacity-building initiative across Africa in terms of the scope and the practitioners targeted. Gender-sensitive energy policies and programmes fostered by this action are expected to target disadvantaged groups among target populations, and improve the design and efficiency of implementation and thereby the outcomes of energy programme and projects. 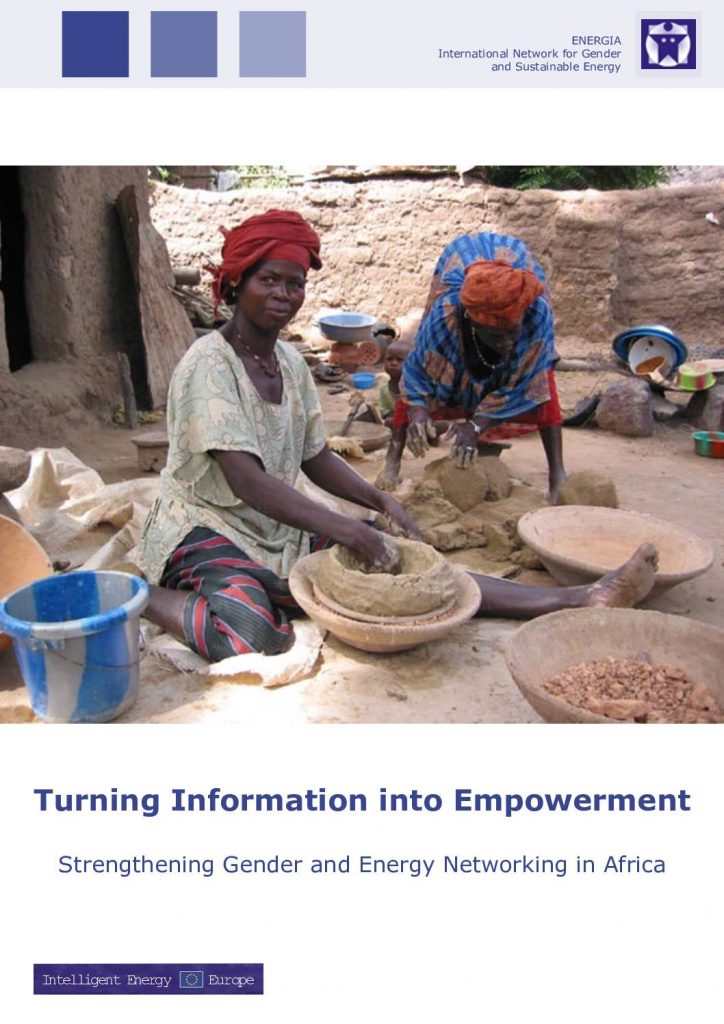