Skip to: The Energy Poverty and Gender Nexus in Himachal Pradesh, India: The Impact of Clean Fuel Access Policy on Women’s Empowerment

This research project has focused on poverty, gender, energy and health issues in the state of Himachal Pradesh (HP) in India, a mountainous state, where the energy uses include space and water heating requirements. Moreover, there is effort involved in walking with headloads of fuelwood over hilly terrain, often at high altitudes. Does the policy to allocate additional quota of clean fuels (LPG, kerosene) in hilly areas, i.e. twenty litres per household as against five litres elsewhere in India, have an impact on gender indicators including literacy, health and income?

The study covered a sample of 9 districts, 84 villages, 792 households and 4296 individuals from HP. The results show that, in HP, biofuels still meet about 70% of fuel needs. In procuring biofuels, women walk typically 30kms each month, and each trip to collect fuelwood takes on average 2.7 hours. The state has infrastructure to provide kerosene and 31% of the population use it. A “willingness-to-pay” survey shows that even at a price of Rs. 13 per litre, which is above the market price, there would be a demand for kerosene. Further, the LPG network is expanding.

The literacy level of women in HP is quite high at 60%, and almost 80% of the women are exposed to some form of media. A lower incidence of domestic violence was reported compared to India as a whole. Biofuel collection is primarily the responsibility of adult women and older men. This is a physically strenuous process, with almost two-thirds suffering from neck ache at least quarterly and half suffering from backache almost daily. Nearly 30% of women felt the time absorbed in collecting wood to be a problem. About 70% of adult women are household cooks and hence exposed to smoke and pollution. They would accept interventions to avoid smoke, and 73% of them would choose some form of ventilation over improved stoves.

Greater political attention and backing are required to give women access to modern fuels and to free them from daily drudgery. 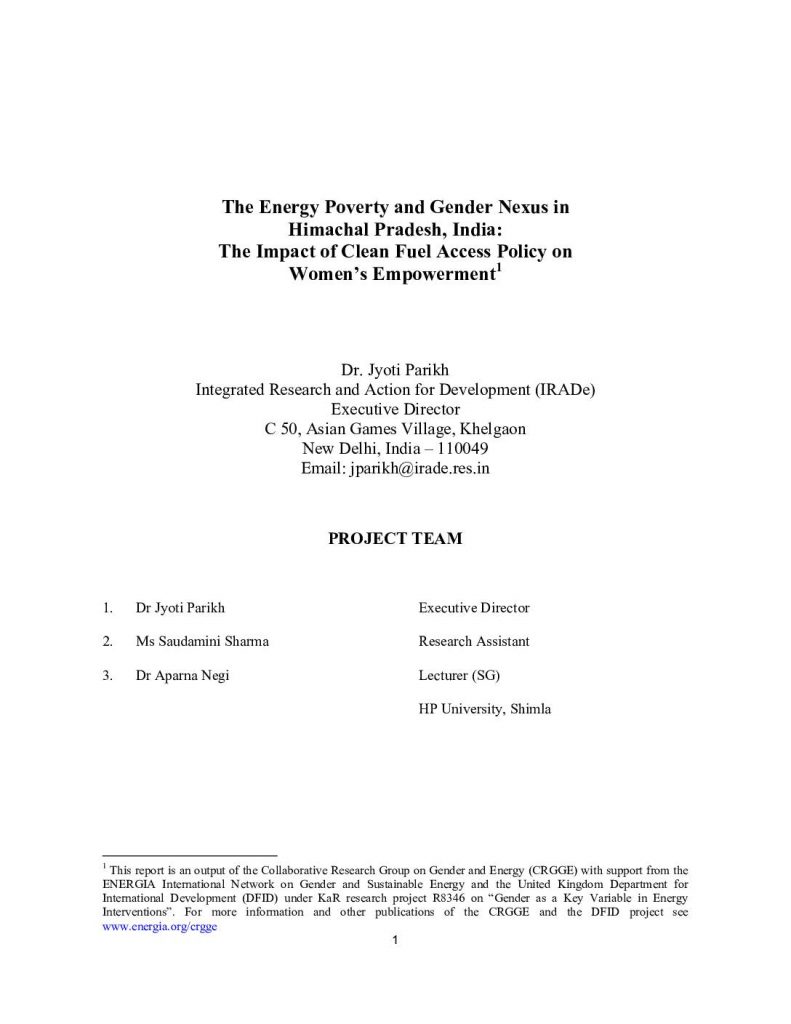 The Energy Poverty and Gender Nexus in Himachal Pradesh, India: The Impact of Clean Fuel Access Policy on Women’s Empowerment