Skip to: Re-thinking gender and energy: Old and new directions

Women/gender and energy has emerged as one of the critical pathways for linking energy interventions to the Millennium Development goals. Yet, despite many efforts, energy poverty is widespread, and gender inequality exits at every level of the energy sector. At the same time, most poverty assessments and research exclude energy.

This paper is addressed primarily to researchers on gender and energy policy, and asks what approaches to policy research could help make the linkages among gender, energy and poverty more understandable and more convincing to policy makers and practitioners, both in the energy sector itself, and in the gender and development community. It attempts a “re-thinking” of the gender and energy paradigm, by looking both backwards and forwards.

It begins by offering a selective review of approaches to gender in energy research and policy in two areas: biomass energy and labour-saving energy technologies. Chapter 1 attempts to “unpack” key assumptions and concepts about gender in past research and policy on gender and energy in these sub sectors. Then, state-of-the-art conceptual frameworks are explored for relevance to future policy research on gender and energy. In Chapter 2, the sustainable livelihoods framework as adapted to the energy sector is analyzed, and its contributions and limitations. In Chapter 3, recent gender analytical approaches are examined: new gender and poverty thinking, and new gender and environment theoretical frameworks, including feminist political ecology.

Themes from these frameworks that could be analyzed in future case studies on gender and energy are then suggested, together with some possible hypotheses for exploration of gender-energy-development linkages. The analysis is focused on two questions of policy relevance:

This paper is a joint output of the research program of ENERGIA, the International Network on Gender and Sustainable Energy, and an ETC project on Enabling Access to Sustainable Energy (EASE). It is also intended as a background document for the preparation of case studies under a new DfID KaR research project on Gender as a Key Variable in Energy Interventions: Are We Asking the Right Questions?, being implemented by ENERGIA and launched in January 2004. 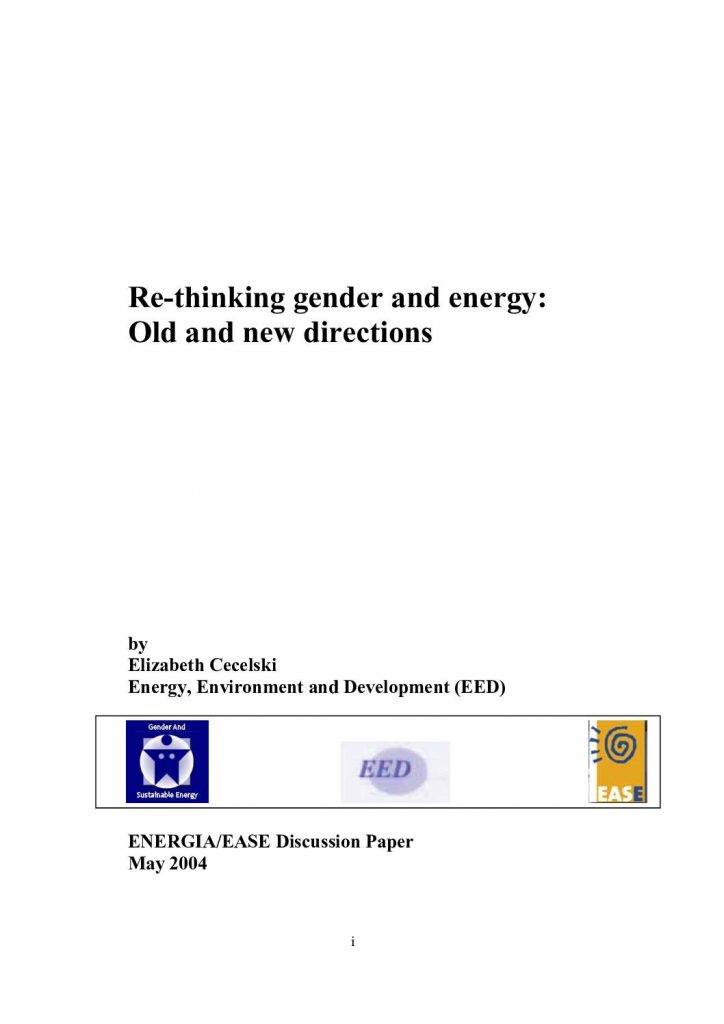