Skip to: Institutional and gender dimensions of energy service provision for empowering the rural poor in Uganda

This case study examines how renewable energy service interventions at two sites in Uganda have contributed to the process of empowering women as well as addressing the different needs of women and men. The projects at the two sites sought to involve solar companies as private sector providers of energy services and aimed at addressing the differentiated needs of women and men at the household and small-scale enterprise levels. Various institutional arrangements for the provision of energy services were used in combination with a deliberate gender strategy. A government and private sector partnership was established by the Ministry of Energy and Mineral Development through the Uganda Photovoltaic Pilot Project for Rural Electrification (UPPPRE). Village banks were provided with a guarantee fund to support credit provision to the rural poor. This enabled solar companies to sell panels to solar users who expressed their need through demanding solar credit. The gender strategy enabled the project to target women for credit and sales, and through their involvement as the key users of solar energy and as technicians in the solar companies as well as owners of small enterprises. Replication of this gender strategy was then attempted but without government support through a partnership of a private sector solar company, the community and an NGO in a solar-wind project on Bufumira Island in Lake Victoria. A solar company sensitised communities so that they understood the importance of solar energy services to the needs of women and men in households and small enterprises. The NGO, the East African Energy Technology Development Network (EAETDN-Uganda), dealt with training on gender needs and power relationships between women and men. Then individuals purchased solar panels either through seeking funds from various rural and commercial banks or by using their own savings from the sale of fish.

The key finding is that a deliberate use of gender analysis with a specific gender strategy in energy interventions by governments, solar companies and village banks can result in significant benefits for both women and men. It can further support women’s empowerment, especially if combined with support and encouragement for income-generating activities. The benefits for women as well as men included gains from their involvement in income-generating activities, the ability of spouses to pool resources and cooperate in repayment of solar loans and the increase in joint businesses between women and men. Training in maintenance, battery charging and usage for both men and women helped to ensure sustainability of both projects. Girls’ education performance improved because they were able to study later at night after completing their domestic chores. The school also considerably reduced its expenditure on lighting. 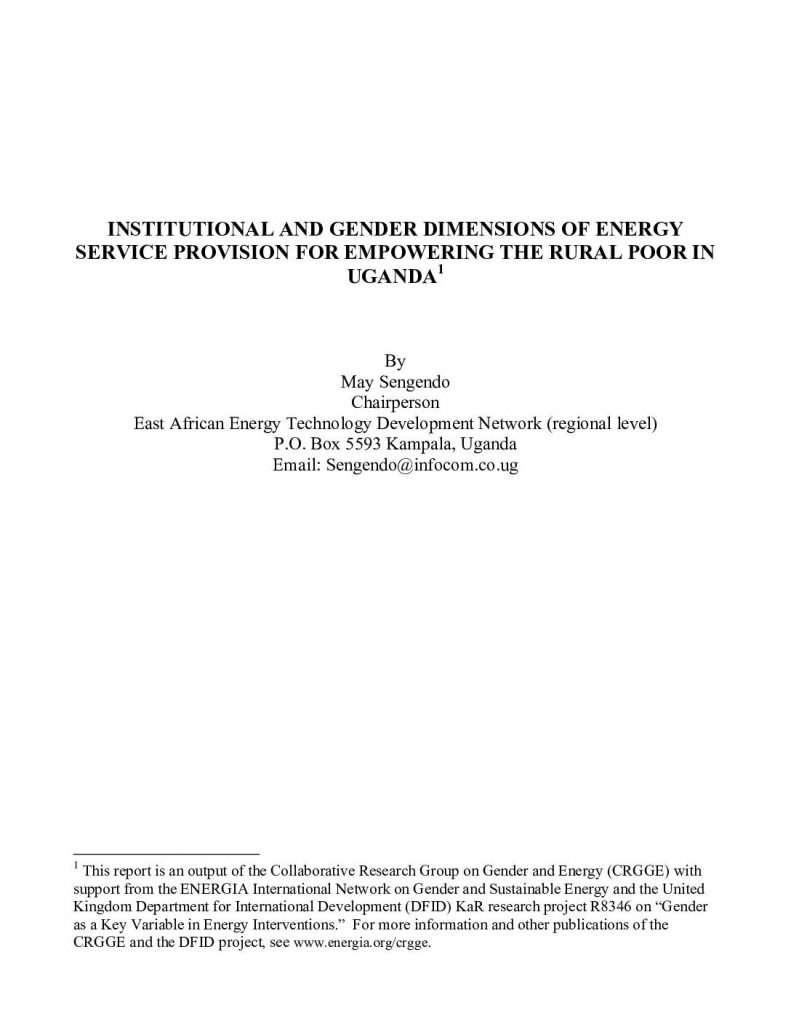