Skip to: Gender mainstreaming in the Botswana power corporation

The Botswana Power Corporation (BPC) has recently launched a gender mainstreaming process with
the aim of ensuring that gender is considered during planning and implementation of energy projects
and programmes. This project was conceived after an audit of energy policies and programmes
conducted by the Gender and Energy Network of Botswana (GENBO) revealed that the energy
sector in Botswana was not gender-sensitive and the energy policies and programmes were not
gender-responsive. Although some effort has been made at a policy level, such as the Draft National
Energy Policy that calls for the inclusion and consideration of gender differences in energy planning,
many factors in the energy sector are still insensitive to gender issues. In relation to energy access,
reports indicate that electricity connection rates in rural areas still remain very low in Botswana.
High connection costs, often considered prohibitive, result in many poor households being unable
to connect to electricity. Levels of poverty are highest among female-headed households, and as
a consequence, female-headed households in rural areas find it difficult to connect to electricity,
resulting in low connection rates for this group.

With the support of ENERGIA, the International Network on Gender and Sustainable Energy, BPC
embarked on a gender mainstreaming project with the overall goal of ensuring that the energy needs
of both women and men were included in the planning and implementation of the rural electrification
programme. Through mainstreaming gender into its operations (grid and off-grid), BPC sought to
receive guidance on an appropriate strategy to design and market electrification services and products
to its customer base and reach those being marginalised in terms of electricity access. Additionally,
BPC also aimed to institutionalise gender sensitivity within the organisation.
The approach and methodology adopted for the gender mainstreaming process was consultative, with
major contributions received primarily from BPC staff and customers in the off-grid pilot villages. A
situational analysis on energy, gender and poverty linkages in Botswana was undertaken using the
key diagnostic steps of literature review, project document review, institutional analysis and fieldwork.
These steps were important in enhancing the understanding of energy and its role in improving the
livelihoods of women and men.

Fieldwork was carried out in four villages, Dikgatlong, Kgope, Lentsweletau and Medie. These villages
were considered appropriate locations to commence fieldwork as they represented a combination of
electrified and non-electrified villages, which provided data for both the grid and off-grid objectives
of the Gender Mainstreaming Project. A total of 130 households were interviewed: 94 female-headed
and 36 male-headed. Overall, the combination of data collection methods used in this study included:
structured interviews, semi-structured interviews, focus group discussions and in-depth interviews.
Guided by the diagnostic steps, a Gender Action Plan (GAP) was developed in order to effectively and
systematically mainstream gender. 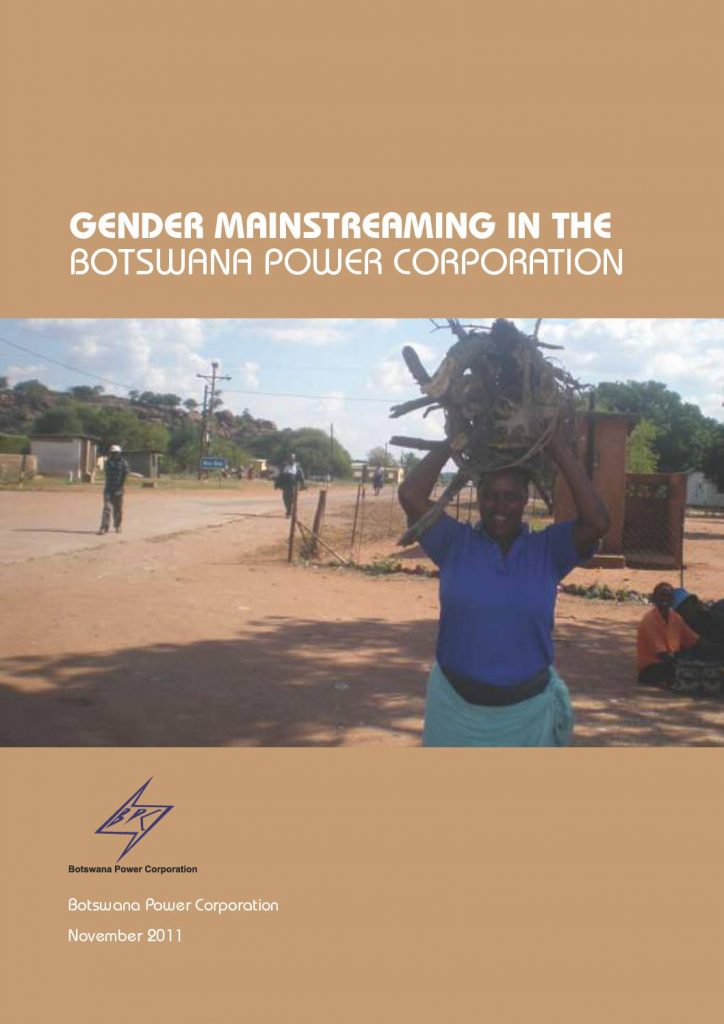