Skip to: Gender and Fossil Fuel Subsidy Reform: An audit of data on energy subsidies, energy use and gender in Indonesia

The Government of Indonesia is considering reform of its consumer subsidies for liquefied petroleum gas (LPG) due to its rising fiscal cost: IDR 25 trillion (USD 1.9 billion) in 2016: around half of its total energy subsidy expenditure. Subsidized 3-kg LPG cylinders are currently available to all citizens. Reforms are likely to target the subsidy to the poor or replace it with cash transfers through the social assistance system.

The impact of energy subsidy reform on the poor has been widely studied. Most subsidy benefits tend to be captured by the wealthy that have the most purchasing power. But poor households are most vulnerable because they can least afford higher energy prices. Gender differentiated impacts are, however, poorly understood. In the case of LPG, a household fuel used for cooking, women are likely to be more affected than men because they do most of the cooking and household management.

This study provides an initial investigation into LPG subsidy reform and gender in Indonesia by examining the available data on household use of energy and relevant gender issues. The focus is on the poor and near- poor, which comprise the bottom 35 per cent of the population by income. Information is derived from five national household surveys and a review of relevant literature.The study is part of a broader project on energy and gender supported by the International Network on Gender and Sustainable Energy (ENERGIA) and the U.K. Department for International Development, which includes an international literature review and scoping studies in Bangladesh, India and Nigeria.

This data audit aims to do two things. First, it gathers general data on the status of women in Indonesia. This demonstrates the degree of gender equity and whether women face disadvantages. Second, the report examines energy use, particularly by poor women, to establish whether women are more likely to be affected by subsidy reform. The audit aims to establish a baseline and to identify data gaps. A later phase of work may seek to address some of these data gaps and identify policy implications and solutions. 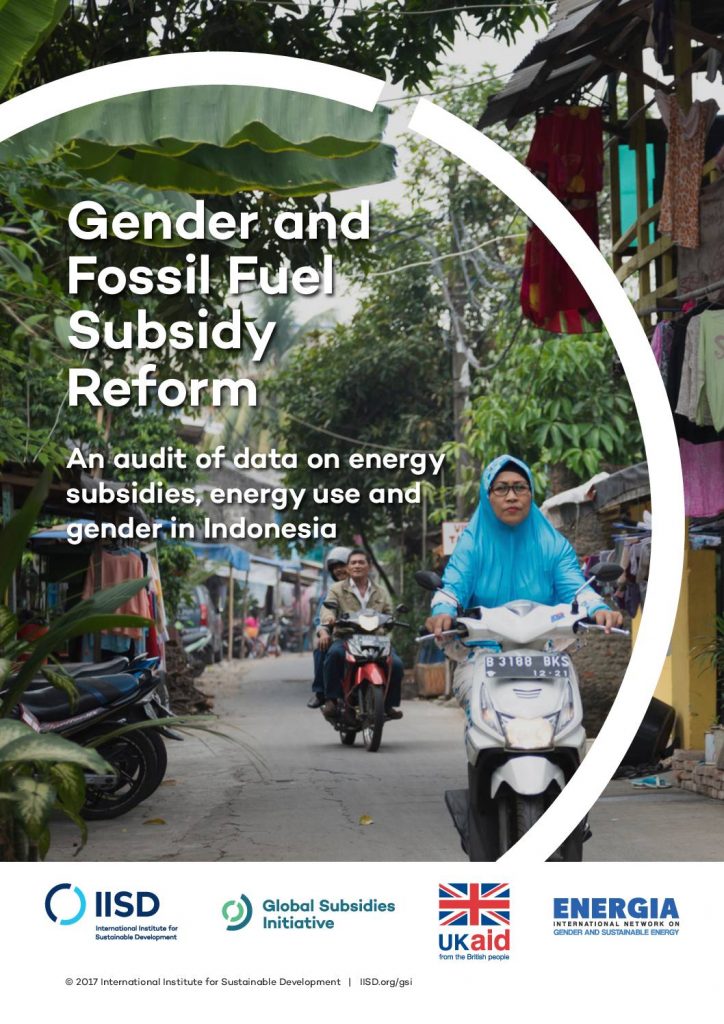 Gender and Fossil Fuel Subsidy Reform: An audit of data on energy subsidies, energy use and gender in Indonesia